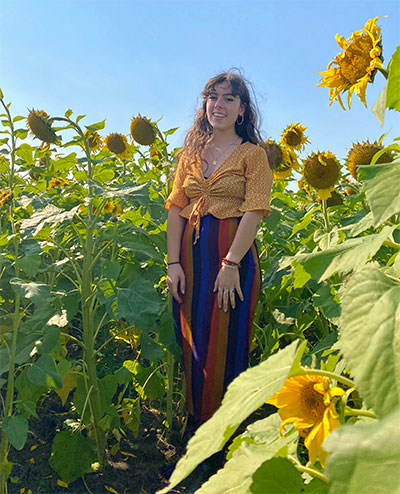 In her student statement Yoana wrote: I was excited to discover this scholarship opportunity because it combines two things that I am very interested in and passionate about – that is – art history and writing. My higher education journey has been one of rediscovery. Originally, my goal was to go into Art Conservation. However, after taking a poetry class for a general requirement, I was reminded of how much I value literature. This prompted me to change my trajectory to be an Art History and English double major. It is a constant wonder to me how something as small as a class may change your life path so drastically. Another huge change happened for me when I was only seven years old. That was when my family moved to the United States from Bulgaria. My parents decided to come here in order to give their kids better opportunities. I have been aware of this act of love since I was quite young and have done everything I can in order to do my part in upholding this hope for a better future. I have worked very hard in my academic studies, being released from ESL classes only two years after we moved to America. I also took mostly honors and AP classes in high school and now have the privilege of attending a wonderful university like Loyola.

I want to do everything I possibly can to take off some of the financial burden off of my parents, while continuing to excel in my studies. Aside from academics, I have also interned at the Elmhurst Art Museum, where I gained experience working as a Curatorial Intern. This gave me much insight into what goes on in actually putting together an exhibition at a smaller scale museum, and I was able to help lead tour groups and research the upcoming exhibition. In my current internship at the Midwest Modern Language Association, I am helping out with a more editorial side of things. I have been in charge of creating and upholding the social media presence of the organization and reading and reviewing book reviews. When pairing these two experiences together, I hope to one day be able to be editing for an art magazine or working in close collaboration with artists to organize shows and connect community. In addition to this, I am also a visual artist myself. I have been drawing since I was a kid and still intend to complete my Studio Art minor. I also had the pleasure of working at Daprato Rigali Studios here in Chicago. It is one of the few stained-glass studios in the country. I was able to learn to create stained glass from start to finish, which was a unique and enriching experience. In short, I do believe I would be a great candidate for this scholarship, as I am a very motivated individual with a passion for art. I want to help my parents in any way possible as well and this scholarship would certainly help in alleviating some financial pressures. I appreciate your time and thank you for considering me for this scholarship.

Eileen Monaghan Whitaker and Frederic Whitaker were both personal and professional partners, and their watercolor paintings, specifically here Eileen Whitaker’s “Legacy of Spain” and Frederic Whitaker’s “Facade” reflect their shared perspective, while also reminding of the unique integrity of each of their practices. The differences in composition, approach, and technique communicate
the different interests that the artists had when painting a scene, but also place their visions in conversation with each other, as one places into focus what the other fades into the background. Both works have a deep color saturation that works to create and emphasize the detail. In Frederic Whitaker’s piece this is done by using a gold color for the ornamentation around the door
which the eye is naturally drawn to, while in Eileen Whitaker’s piece there are more pronounced shadows and wet on dry details in order to bring out the architectural ornamentation. Both of the works, in this way, highlight the love for capturing architecture that the Whitaker’s shared. The different textures and materials used in the real buildings are evident through the technical
application of the watercolor. For instance, though most of the first layers of color appear to be applied with a wet on wet technique, consequential layers, such as the planks on the door in “Facade” and the partitions of the windows in “Legacy of Spain” appear to be added later, with a wet on dry technique for more control and detail. There is a heaviness in the atmosphere in both of the works that is concentrated in the architecture. In both cases, the darker, more muted tones, paired with the more expressive handling of the media creates a depth in the work that surpasses an objective recording of the landscape.

Though the works look incredibly similar stylistically, upon closer inspection, one can see that the subject matter is handled in very different and nuanced manners. This is most evident in the compositional arrangement of the pieces. Frederic Whitaker’s “Facade” is a vertical composition, with equal partitioning of focus to the people inhabiting the scene as with the facade of the building itself. The foreground of the work is filled with people, and the close cropping of the edges of the piece creates an immediacy and a closeness to the audience. It is as though Whitaker captured the image intending to include us in it. We are almost a part of the watercolor,
conversing with the people and moving throughout the composition. However, since the composition of “Facade” does not allow a view outside the focus on the literal facade, there is a heavier, more claustrophobic feel to it. This is magnified by the two trees to the left of the door that shorten the composition and the darker parts of the facade that are textured with a dry brush technique. On the other hand, Eileen Monaghan Whitaker’s composition in “Legacy of Spain” is horizontal and more removed. The composition is more expansive, allowing the eye to roam across the work without feeling constricted. The scene appears much farther from us, in
comparison to “Facade,” suggesting that Eileen Whitaker was not partaking in what she was rendering, but rather observing the quiet moment from the outside. In her piece it is evident that
the architecture takes the center stage; the two figures in the foreground are just additions to naturalize the landscape. Meanwhile, in Frederic Whitaker’s piece, the people hold equal
importance to the architecture, suggesting more of a narrative approach. This is even pronounced in the handling of the vegetation, as in Eileen Whitaker’s work the greenery on the trees is much
more sparse, allowing the cathedral behind to come through, while in Frederic Whitaker’s piece, the two trees create one of the edges of the composition and bring attention back to the people
and the facade.

Eileen Whitaker’s piece was done after the passing of her husband, when she traveled multiple times to Guatemala, while Frederic Whitaker’s “Facade” was completed some twenty years earlier.
Despite this, it is clear to see that they heavily influenced each other in the ways in which they breathed life into compositions with the expressive handling of the medium and their moody and
muted palette. Though different locations, nuances, and approaches were employed in these works, it is clear to see that the two artists’ styles complement each other. While Frederick
Whitaker focused on people’s interaction with their environment: highlighting both human relations and the beauty of architecture, Eileen Whitaker focused more on the experience of
occupying space and beholding beauty, without necessarily being a part of it. It is evident to see that even after the passing of Frederic Whitaker, Eileen Whitaker’s work was still in conversation
with the pieces they had been doing, despite the space of years and countries that separated the pieces.