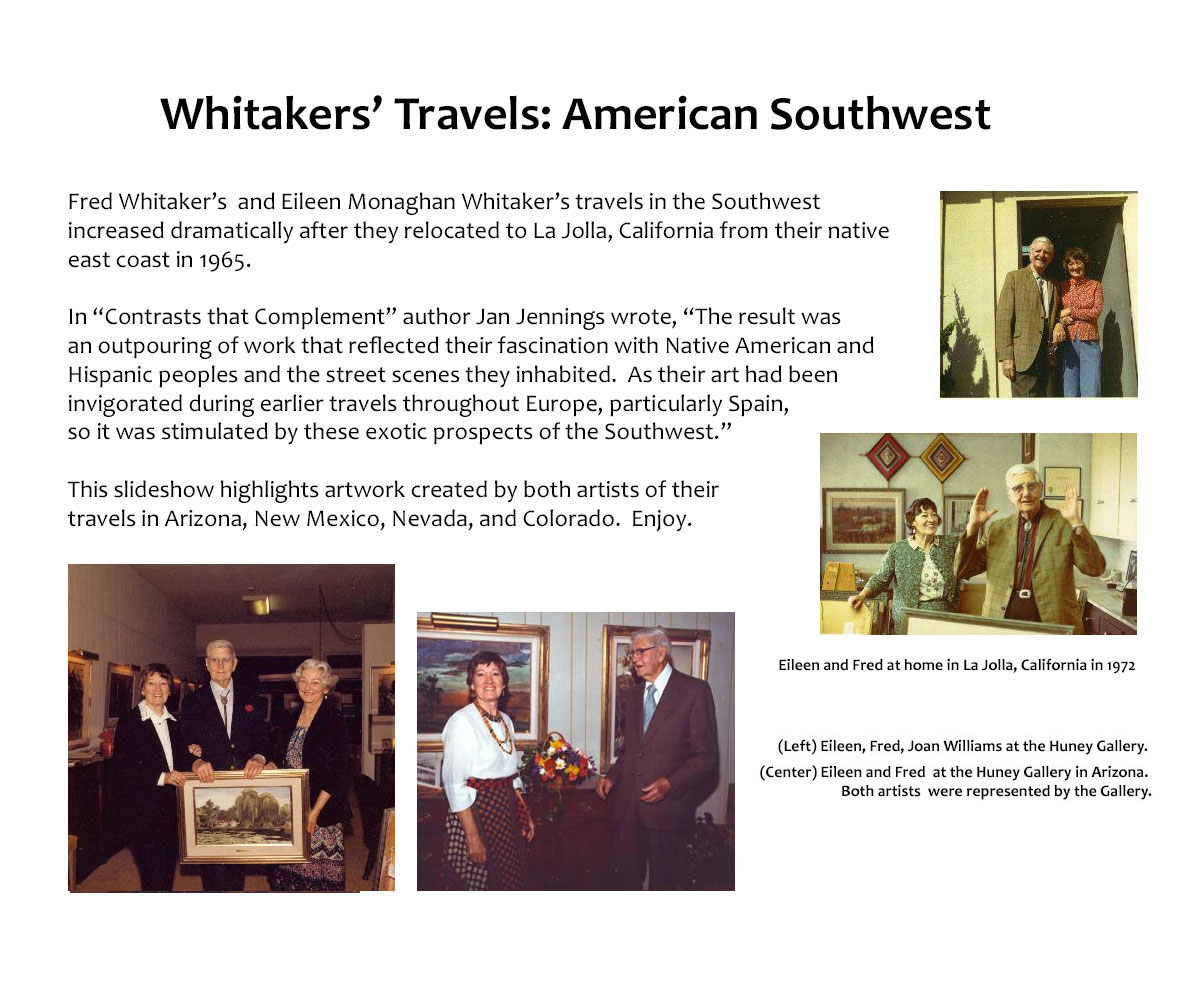 Travel to Spain and Portugal with the Whitakers circa 1950s

The goal of this exhibition was to share the lifetime accomplishments of Frederic Whitaker and Eileen Monaghan Whitaker with a new and global audience,  affording the viewer a more intimate and informative view of their work.  The exhibition reveals the bold vision and creative passion the Whitakers brought to their lives and their art, that made them masters of the most American of mediums, the American Watercolor. The images chosen were done so in the hopes that they reflect an overall understanding of the Whitaker’s art and their unique relationship. Included are essays from the latest book on the Whitakers “Contrasts that Complement” by Jan Jennings : Donelson Hoopes, museum professional and art historian, sheds light on the Whitaker’s place and importance in the history of American Watercolor; Theodore F. Wolff, author and art critic shares his keen insight into Frederic’s working style; and art critic Robert L. Pincus allows us to see and understand Eileen’s creative spirit so evident in her art. As the curator, I strove to examine their respective styles, and how through the fluid vitality of watercolor, they captured the essential spirit of their subjects. Presented in two parts, showcasing each painter, we hope you enjoy this tribute to two extraordinary talented and complementary artists, Frederic Whitaker and Eileen Monaghan Whitaker. – Barbara Cox, Director and Curator, The Frederic Whitaker and Eileen Monaghan Whitaker Foundation

The Grand Opening events on December 8th included a multimedia presentation,  American Masters: The Whitaker’s and the Watercolor Tradition, by former Chief Curator at SDMA, Scott Atkinson and an all day watercolor workshop,  Love of Life: Nature and Culture Through the Whitaker’s Art, by renowned artist and mentee of Eileen Monaghan Whitaker, Ken Goldman. READ MORE…

On Valentines Day, 1943, artist Frederic Whitaker met artist Eileen Monaghan at a one-man exhibit of his work at Ferargil Galleries in New York City. It was the beginning of a personal and creative partnership that would last for nearly forty years. Their far-reaching talent and prolific body of work as watercolor artists are featured in this traveling exhibit, Translucent Visions – Frederic Whitaker and Eileen Monaghan Whitaker, A Retrospective in Watercolor.

The work is diverse in scope and subject, chronicling their individual careers as well as the passing of decades. Some paintings reflect the ways in which they shared perception and artistry; others reflect their unique and distinct individuality. Throughout their lives both artists received national honors and extensive recognition through duo, group and solo exhibits and museum acquisitions.

“About every other year after we met , we traveled to Mexico”, says Eileen. With her affinity for languages , she quickly learned to converse in Spanish… Fred could read and write the language…Together they had no problem chatting with the natives , finding their way around , and getting to know the Mexican people. And together, they passed through “virtually every one of Mexico’s states”, said Fred.” – Jan Jennings from the book Contrasts that Complement

“Long before their resettlement in La Jolla, Ca, the Whitakers had traveled extensively in the American Southwest and Mexico, accruing inspiration for their paintings. The result was an outpouring of work that reflected their fascination with Native American and Hispanic peoples and the street scenes they inhabited.” – Donelson Hoopes from the book Contrasts that Complement

THE WHITAKERS’ WORLD OF ANIMALS: FEATHERS AND FUR

Both Eileen and Fred delighted in using flora and fauna as subject matter. Depending on their surroundings, the Whitakers’ fauna reached from domestic animals and pets of friends, to wildlife they encountered in the canyons of their La Jolla neighborhood, travels to the exotic, and the world famous San Diego Zoo and Animal Park. With a sweeping view of the Pacific Ocean from their home, seagulls became a frequent subject for both artists. READ MORE. and VIEW GALLERY..