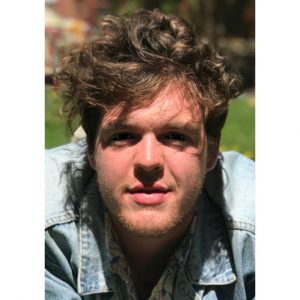 BRENDAN KENNY, who is majoring in fibers at Massachusetts College of Art and Design, has been awarded a $2,000 Art History scholarship from the Frederic and Eileen Monaghan Whitaker Foundation. His essay describing the differences in the way the two renowned watercolor artists approached architecture was the winning entry in the Foundation’s Fall 2018 Art HIstory scholarship competition. Upon completing his education, the student from Malden, Massachusetts wants to work in a gallery or museum setting, either in restoration or curation.

“My interest in curation started my freshman year when I showed in a gallery for the first time, it lit a fire in me that I know I need to kindle,” he said.

He has curated two shows so far during his undergraduate career including one with another student. While their works were in different areas of study, they overlapped seamlessly. What made the show special he said was the learning aspect it held. “I taught her how to weave, and she taught me every program in the Adobe Suite.”

Kenny’s winning essay is posted below.

Frederic Whitaker’s “Baroque Facade” displays a deep understanding of color, in regards to space and architecture. Namely, what I am looking at is his use of color throughout the piece; specifically his use of gray, or lack of the use of gray. In an almost expressionist manner, he chooses color as shadow, rather than blocking it out in a gray or almost-black color— which as we know, shadow is not truly gray.

In a similar way, gray is not really present throughout the piece, even in the top portion, in what appears to be a stormy sky, the tones are a sort-of green-blue color, rather than a full on gray. In this way, the painting almost mirrors the ideals of the Baroque period— by using layers of colors mixing together, rather than a flat tone, Whitaker plays into the richness, the drama of the era’s paintings and architecture. In seeing the painting, the viewer can almost feel the theatrics of the original builders of the facade; almost as if erecting the structure was a performance in itself— like painting plein air is a performance, as I am assuming Whitaker did.

In every detail of the facade, the viewer can see Whitaker’s delicate, yet imposing hand— he clearly had an in depth understanding of not only the structure but also of the materials he was using. Watercolor can be a difficult medium, because of it’s transparent, granulating and staining properties, creating such a detailed piece, at the size it is is a huge feat. From the view that I am seeing the photo of the work, there are no real places that I can see the pigment settle into the teeth of the paper, nor are their visible unintentional transparency or stained areas that are taking me out of viewing the painting as a whole.

That being said, there is a solid quality in the painting, the parts that are meant to be the actual stone facade of the building feel very grounded. The pigment is applied very opaquely, which allows me to see it as a hard, cold piece of stucco, while the looseness and transparency of the shadowy areas confirm that idea of the solidified areas being stucco. Particularly, in the lower left region of the painting, near the tree, the shaded areas read almost as liquid pouring into the space— the same argument could be made for light itself: that light can be viewed as a liquid, spilling out over confines of curtains, trees, walls.

It is in the little details, the curves of the faces of the grotesques, the shadows that fall in between the pillars, around the vines and leaves that wrap themselves around those pillars; in the colors, not grays, but blues and chocolate browns that lend themselves to the shadows that make me believe Whitaker understood the drama of the baroque. It is in these details that bring me to where he stood painting this— that transform a piece of cold press paper into a snapshot of one of the most theatrical time periods for art and architecture.

In Monaghan Whitaker’s painting of Horton Plaza, we see a different kind of curvaceous, ornate architecture. Her paintings, as a whole body of work, are more exuberant and gestural than Frederic Whitaker’s. While his, in my opinion capture a more “realistic” physical understanding of the space around him, Monaghan Whitaker’s gather up the energy of the space she paints. Even her color palette suggests that she is moved by a feeling rather than a physicality. Even though Horton Square is supremely colorful, you would not find that ochre or that light red-orange shade present in the San Diego architecture.

In looking at the Horton Plaza painting, even though I have never been there, I feel like I understand the culture of the area— the exuberance, the joy of it. Namely, I am looking at the color splotches near the lamp and above the round windows, the flashes of clarity that are present there. Amidst the chaos of the plaza, the fast -paced movement of it all, there are those spots that my eyes linger on, that slow down the break-neck speed at which it feels Horton Plaza exists in.

The gestural qualities of Monaghan’s work suggests that she came to paint from an emotional place— rather than her husband’s careful lines and curated color palette, she painted what she felt, neither is more or less effective than the other though, each has a unique perspective that makes their work so impressionable, so great.

In my personal work, I focus on the body and mind— ephemeral moments captured and portrayed through particularly time based work. In particular, weaving has been instrumental in my practices since the beginning of my undergraduate career, as well as other fiber and sculptural techniques: crochet, embroidery, even welding and woodworking have become apart of my studio practices.

Over the course of four semesters at Massachusetts College of Art and Design, I have shown in almost ten shows, two of which I have curated, one being a collection of work from the freshman class my first year, the second being a exhibition of myself and a friend’s work that although in two different areas of study and bodies of work overlapped seamlessly. Part of what made that show so special was the learning aspect it held— I taught her how to weave, and she taught me every program in the Adobe Suite.

Long-term, I hope to finish my undergraduate studies at MassArt and go to graduate school, either Boston or go to New York, Pratt or Cooper Union; I have even looked into the material studies program at the School of the Art Institute of Chicago. I know that my undergraduate schooling will not totally fulfill me and I need to pursue some kind of masters program. After my time in school, I would like to work in a gallery or museum setting, either in restoration or curation.

I believe my interest in curation started my freshman year when I showed in a gallery for the first time, it lit a fire in me that I know I need to kindle. In regards to extracurriculars, I have been presenting for faculty during working groups and retreats on the systems of critique that we are presented with during undergrad, how these processes perpetuate systems of oppression present in every collegiate environment in America.

I am also on student government, as a representative for my department and in the fall semester, I am an orientation leader. I strive to improve the student experience at MassArt, so that in the future our institution will be an equitable, safe environment for all students— I hope it will be a place that continues to foster young artists’ abilities and provide a space where they can flourish and begin long careers as artists, activists and makers.

Financially, my family is in the middle class— as huge as it is. My mother works two jobs, as a nurse in pre-admission testing, and teaching in a clinical program for nursing students. My father is the facilities manager at a bank and works extra jobs doing home improvement and construction on the side. They work forty or more hours every week, but wanted my brothers and I to have the best education possible, so they sent us to a private school, which was no easy feat— then my two older brothers’ college careers overlapped, so they had two in college at the same time, while I finished at a private high school. They have given everything to my brothers and I but we are still struggling, and as I am moving out to an apartment this fall, I will be taking on three jobs to make rent.

Any money I can get is a great help. Art supplies, namely yarn and materials for weaving are upwards $30 a piece, and at the scale I hope to work at, I do not know how possible it will be for me to continue with what I have.